Macaroni Pie in Barbados. It’s probably everyone’s ultimate comfort food, and everyone and their grandmother has a recipe for this dish. Some recipes call for hot pepper sauce, some use evaporated milk and eggs while still others add onion and sweet pepper (aka bell peppers…the distinction is made here between sweet and hot peppers). Even the bag of pasta had a recipe for Macaroni Pie!

On one of my first trips here, I bought 2 cookbooks and one of them, Barbara’s Bajan Kitchen by Barbara E. Husbands had the recipe for Macaroni Pie that formed the basis for my dinner tonight. I debated following the recipe exactly, but that’s not the kind of cook I am. I substitute, I add, I make it mine. And my Macaroni Pie is no exception.

Before I get to the recipe, I’d like to take a moment and talk about the macaroni used. In Canada, if someone told me to use macaroni, I’d get elbows. Not here. In Barbados, macaroni is long, thin tubes of pasta and the correct noodles are essential to the dish.

Ingredients assembled and ready to go!

1. Cook macaroni in boiling, salted water until al dente. Drain and set aside.

2. In a small pot, heat a bit of oil (I used sunflower, but whatever you have is fine). Put chopped onions and peppers in the hot oil and saute until slightly soft, about 5 minutes or so.

I can practically smell the onions and peppers cooking

3. Add the tomato paste to the onions and peppers and cook for about 5 minutes, to remove some of the canned tomato taste.

Cooking the “canned” flavour out of the tomato paste

4. Add your milk to the pot and allow to come just to a boil, stirring occasionally. When the milk starts to boil, remove from heat and add most of the grated cheese (keep some aside for topping).

5. Return to heat and stir the mixture to ensure the cheese is melted and then add a squirt of mustard and a dash or two of the optional hot pepper sauce. Taste your sauce and at this point, you can adjust the salt and hot sauce to your taste.

6. Pour mixture over your macaroni noodles and mix well.

7. Put it all into a greased baking dish, sprinkle breadcrumbs and the rest of the grated cheese on top. 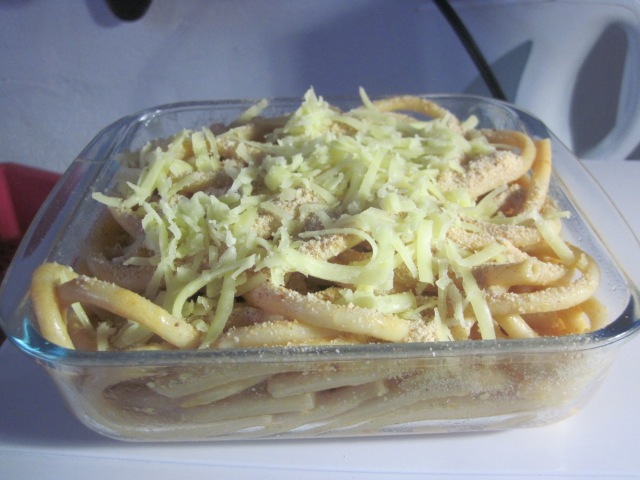 All assembled and ready to go in the oven

8. Bake in a 350 degree F oven for 45 minutes or until golden brown (or in my case, put it in your toaster oven set to 350 degrees F and hope the darn thing doesn’t burn).

Once the top is browned to your liking, carefully remove from the oven and eat. I had thought about serving this with a salad, but after working in my tiny kitchen space for over an hour to assemble this, I was hungry. So I didn’t have a salad. I do want to point out that my macaroni pie didn’t set the way most of them do. And I think it’s because I had too many noodles for the amount of sauce, and because of the toaster oven, I couldn’t leave it in for the right length of time. However, the flavour was really good and I have leftovers. 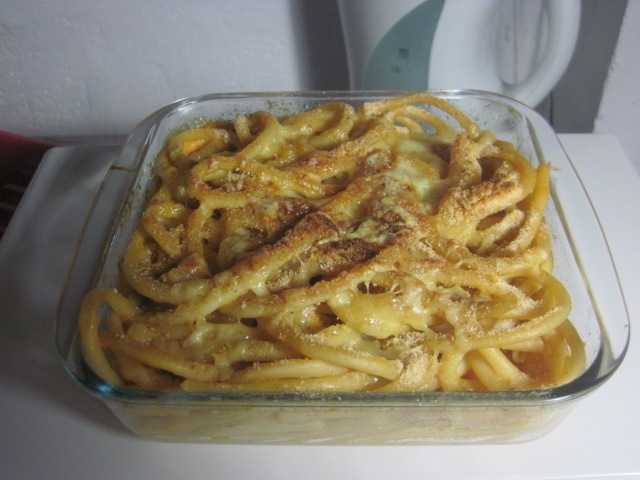 This entry was posted in Culinary Experiences, recipes and tagged Cooking, Food. Bookmark the permalink.